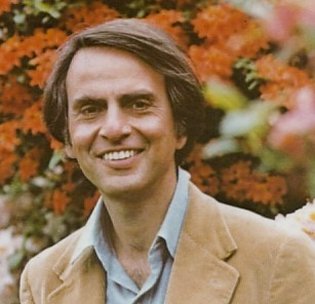 Carl Sagan (1934 - 1996) was an American scientist on the fields of astronomy and astrophysics and a science promoter, much known for his TV series Cosmos and the book of the same name. He was famous for exobiology and for S.E.T.I. He also write a novel called Contact.

He was born in Brooklyn, New York. Sagan studied at the University of Chicago, where he received a bachelor's degree (1955) and a master's degree (1956) in physics, before earning his doctorate (1960) in astronomy and astrophysics. He taught at Harvard University until 1968, when he moved to Cornell University.

He worked for the NASA on Viking and Mariner robots. He made new discoveries about Venus and its atmosphere. He help to send a message for alien civilizations on the Viking.

Cosmos: He is most famous for his work on the TV series Cosmos. It was a program viewed by more than 600 million people in 60 countries. The TV series and the book treat themes like science, science divulgation, history of science, the origin of life, the skeptical point of view and our place in the universe. It is written for the non-specialist and is understandable by many people.