We are excited to announce that we're holding an awesome giveaway. In addition to four copies of the movie Ex Machina on Blu-ray, we will also be giving away four theatrical posters signed by writer/director Alex Garland. The new Blu-ray is packed with extras including an in-depth behind-the-scenes featurette, a Q&A with the cast and crew from SXSW, and eight vignettes.

If you haven't seen Ex Machina yet and you want to check it out, here's a rundown of the plot.

"After winning a competition to spend a week at the mountain estate of his company’s brilliant CEO (Oscar Isaac), programmer Caleb (Domhnall Gleeson) arrives to discover he has been chosen to take part in a study of artificial intelligence. Sworn to secrecy and cut off from the outside world, Caleb meets his subject, a beguiling and seductive android (Alicia Vikander)—and is plunged into an A.I. experiment beyond his wildest dreams in this epic thriller charged with heart-stopping suspense."


Second, simply tell us your favorite AI character in the comments below!

Must be 18 or older OR have a parent or guardian's permission to win. Eligible entrants MUST live in USA or Canada. Check out the official rules for details. Four winners will be randomly selected from all eligible entries. 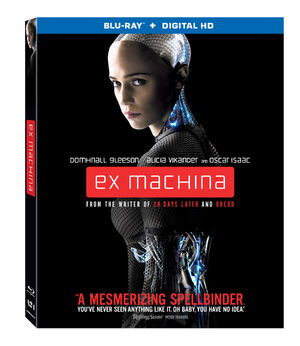